To put Rosenbluth on the case indicates that the Muslim Brotherhood is worried about Trump’s ascendancy in the 2016 Presidential contest.

And, if the Muslim Brotherhood wants to kill Trump’s chances it should be clear to all that Trump is on to something with his suggestion that Muslim immigration to America be slowed.

Remember the political stunt at the Trump rally in Rock Hill, South Carolina on January 8th where a Muslim woman stood ‘silently’ in protest wearing a yellow star (a reader informed me I was wrong in my initial characterization of the star) and standing next to her was the social justice lawyer and community organizer Marty Rosenbluth.

See our earlier report on the stunt here.  CAIR was obviously prepped and waiting in the wings to launch its usual hissy-fit!

Because one of the primary goals of American Resistance 2016! is to ‘showcase’ those working to promote mass migration to America and especially Muslim immigration of all sorts, I wanted to know more about Rosenbluth.

First, see the article at the Progressive ‘Democracy Now’ where reporter (and Democracy Now! founder) Amy Goodman interviews Rose Hamid about how she came to be standing during a Trump speech with that yellow star pinned to her shirt.  (Shoebat.com has an extensive look at Hamid’s political background, click here for that information.)

First, she and Rosenbluth did not arrive at the venue wearing the star perhaps knowing they might be turned away at the door, but pinned them on their clothing only after Trump began to speak.

Hamid claims she just wanted Trump supporters to meet a Muslim and find out that they aren’t people to be feared.  If that was her real agenda, she blew it!  Clearly it wasn’t.  Note in the interview some of those sitting around her treated her kindly and with friendly conversation until Rosenbluth made his move, pinned the star on his shirt and apparently directed Hamid to stand up.

Rosenbluth is a skilled Leftwing agitator as we learned when spending only a few minutes looking around for more information on him.

First, see Democracy Now where we learn how it all went down from the Left’s view of things.

Then, be sure to see this article featuring (aggressive) immigration attorney Rosenbluth working in Durham, North Carolina on behalf of illegal alien clients facing deportation.  We learn that he was an anti-Israeli activist on the West Bank.

Ten years ago, this wasn’t the job Rosenbluth would have imagined for himself. A New York native, Rosenbluth spent more than seven years in the West Bank, advocating for Palestinians who, because of laws restricting their employment, depended on informal street corner markets for work.

Perhaps it is that part of his resume that brought him into contact with the Muslim American Society, a Muslim Brotherhood advocacy group in the United States.

Rosenbluth is listed on their website as an ‘advisor.’  Here is what they say about him:

Advisor – Marty Rosenbluth... Marty Rosenbluth prides himself on being soft-spoken and calm, speaking the language of human rights. Beyond his words are his actions which have been most impressive. Mary was Amnesty International’s area specialist for Israel/Occupied Territories in the 1980s. Marty RosenbluthIn addition to publishing a plethora of media, such as reports, case studies, press releases, mailings, leaflets, audio/visual recordings created by Palestinian and Israeli human rights groups, Marty is also an independent documentary film-maker. His publications feature material from Palestinian trade unions and U.S. based solidarity groups, and first hand accounts of events and conditions in the Occupied Territories. He has worked as an organizer, policy advocate, community educator and is specialized in analyzing the collateral immigration consequences of criminal convictions, while providing direct services to the newly-arrived undocumented.

He was also involved (at least at one point) with North Carolina’s ‘Southern Coalition for Social Justice’ just one more of George Soros’ little projects. See their funders here.

I’m sure there is much more if one wanted to spend more time digging, but this is enough to let you know this was a carefully staged event which frankly doesn’t endear Americans to their Muslim neighbors as supposedly Ms. Hamid and her handler Rosenbluth claimed they wanted to do.  What a joke!

To our friends in North Carolina:

It has puzzled me for years about how your state got targeted initially as a prime refugee resettlement state and a prime destination for Muslim migration in America.  Why?

See all of my posts at RRW on North Carolina by clicking here.  And, see especially this 2011 post about how KSM went to college there.

This is one more in a series of posts tagged, Know the enemy, click here for more. 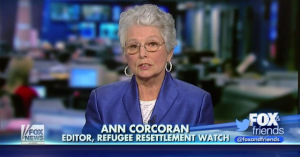 When the migrant numbers reach a critical mass, and they are almost there now, America will be changed forever.

This year I'll be writing about illegal and LEGAL immigration and the promoters of mass migration to America on both the political Left and the elite/corporate/crony Right because nothing else matters but this.

I've been following migration issues since 2007 when I first became aware of the UN/US State Department Refugee Admissions Program and the danger it poses for America.

For eight years, my blog Refugee Resettlement Watch covered those dangers as well as the cost to the US taxpayer. You can see it by going here: 'm addressing the crisis of uncontrolled migration from all sources and how the Presidential election of 2016 is, I believe, the most pivotal election since the founding of our great nation.

If we choose the wrong President, especially as it relates to Muslim migration to America, we are doomed! The Hijra will be so far advanced by 2020, it will never be reversed.

A major focus of this one year blog will be those working on the Left to destroy the America we know and love---the archenemies---those groups and individuals who make up the No Borders Left and the Islamic supremacists who have teamed-up through the Democrat Party to destroy Western civilization and with it our Judeo-Christian heritage.

On the Right we will be exposing the corporations (many of them foreign corporations!) and their money-grubbing GOP supporters of globalization working to destroy America by flooding your communities with cheap immigrant labor.

Why am I writing a blog for one year? Because I believe with all my heart that 2016 is the tipping point---we either win or lose America itself this year!

It is up to you! Join the Resistance! Get involved in Election 2016 at the local, state or national level. It is not enough to talk to like-minded people on social media!

As I said, I truly believe that this is the most pivotal year since our founding and we must....

Save our great nation for our children and grandchildren!

When is my state’s Presidential primary election?

All patriots must be registered and get to your polling place or caucus location for the primary election. Go here for dates: http://www.uspresidentialelectionnews.com/2016-presidential-primary-schedule-calendar/

“This is the most serious issue our country has faced perhaps since our founding,” Corcoran explained.

“Unlike policies like Obamacare or Common Core, where we can go back and fight them—this is irreversible.

Once the population reaches a certain level, there’s no turning back.”